From Heraldry of the World
Your site history : Cumbria
Jump to navigation Jump to search 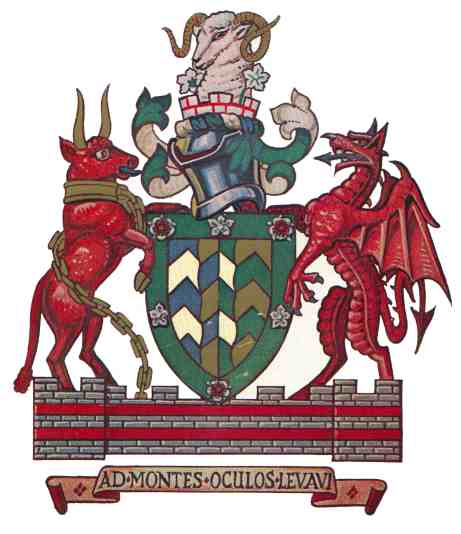 Arms : Per pale Azure and Or a Pale wavy per pale of the last and Vert over all two Bars dancetty of three points upwards countertinctured Argent Azure Argent and Vert all within a Bordure of the last charged alternately with three Roses Argent on each another Gules both barbed and seeded proper and as many Parnassus flowers Argent.
Crest : On a Wreath Argent Azure and Vert issuant out of a Mural Crown Argent masoned Gules a Ram's Head proper armed Or between two Parnassus Flowers slipped also proper; Mantled Vert doubled Argent.
Supporters : On the dexter side a representation of the Dacre Bull at Naworth Gules armed unguled and collared with a Chain flexed over the back Or and on the sinister side a Dragon also Gules the whole upon a Compartment composed of a section of the Roman Wall charged with two Bars Gules.
Motto: 'AD MONTES OCULOS LEVAVI' - I shall lift up mine eyes unto the hills.

The arms were officially granted on 10th October, 1974.

On the green border are Parnassus flowers (representing Cumberland) interspersed with white roses (Yorkshire) superimposed with red roses (Lancashire). The centre of the shield is made up of segments of blue, white, yellow and green divided by wavy vertical lines and zig-zag horizontal lines. This depicts the new County and from left to right the vertical lines of segments show: blue and white for the sea, blue and yellow (gold) for the lakes and agriculture, green and white for mountains and lakes and green and yellow (gold) for mountains and agriculture.

The ram's head crest is taken from the arms of Barrow-in-Furness County Borough and also of Westmorland and is distinguished from them by Parnassus flowers, taken from the former Cumberland Arms, put between the rams' head and the wall on which it stands.

The left supporter is the Dacre Bull at Naworth, a legendary beast from the Cumberland arms. On the right is a red dragon - a reference to the red Dragons of Appleby the ancient county town of Westmorland; also it is heraldically related to the red wyverns of Carlisle and symbolises the connection, going back to Celtic times, between Cumbria and Cambria (Wales).

The supporters stand on a base compartment representing Hadrian's Wall, across which are two red bars taken from the Westmorland arms, which in turn derived them from the arms of the de Lancaster barons of Kendal. The Barony of Kendal was in the South of Westmorland.

The motto: "Ad Montes Oculos Levavi" is taken from the latin version of the Psalms, Psalm 121; and is translated, "I shall lift up mine eyes unto the hills" which was thought apt, as the Lake District Fells can be seen from all parts of the new County.