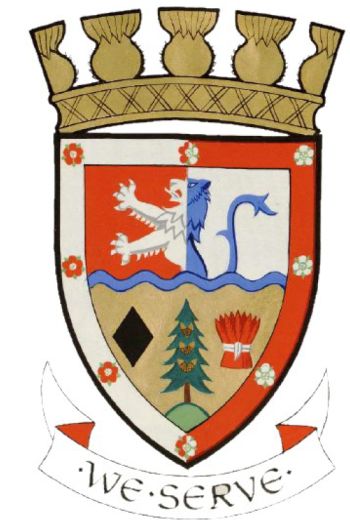 Per fess wavy, a barrulet wavy Azure; in chief per pale Gules and Argent, a demi-lion rampant issuant counter-changed Argent and Azure; in base Or, on a mound Vert, a pine tree fructed Proper between dexter, a lozenge Sable and sinister, a garb Gules banded Argent; all within a bordure per pale Argent and Gules charged with eight roses counterchanged, barbed and seeded Vert.

Above the Shield is placed a coronet appropriate to a statutory District, videlicet:- a circlet richly chased, from which are issuant eight thistle-heads (three and two halves visible) Or; and in an Escrol under the same this Motto "We Serve".

The chief and the bordure are taken from the arms of the burgh of Cumnock & Holmhead. The base symbolises the main activities in the Doon Valley area, mining (black lozenge), forestry (pine tree) and agriculture (garb). The wavy bar is the Doon river.