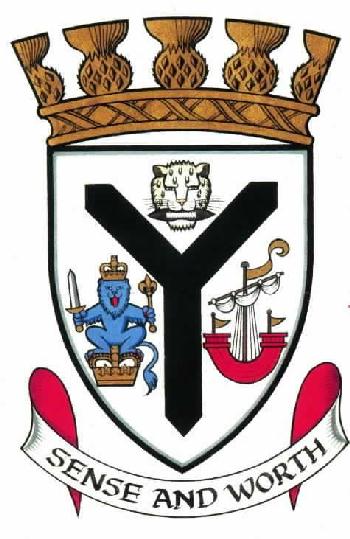 Argent, a shakefork Sable cantoned between in chief a leopard's head affrontee holding in its mouth a weaver's shuttle Proper, in the dexter flank on an imperial crown Or a lion sejant affrontee Azure imperially crowned Gold holding in his dexter paw a sword and in his sinister a sceptre both Proper, and in the sinister flank a lymphad Gules, mast, rigg­ing and sails furled Proper, flagged Or.

Above the Shield is placed a coronet appropriate to a statutory District, videlicet:- a circlet richly chased, from which are issuant eight thistle-heads (three and two halves visible) Or; and in an Escrol under the Shield this Motto "Sense and Worth".

The arms show a black shakefork taken from the arms of the Cunninghame family, bing Masters of the King's stables (a shakefork is a fork to throw up hay). The crowned lion is the crest of the Kings of Scotland, and was used by the Burgh of Irvine. It was already used by the Burgh in 1660. The ship indicates the maritime associations of the district. The leopard's head holding a shuttle is symbolising the weaving industries in the interior parts of the district.