From Heraldry of the World
Your site history : Dülmen
Jump to navigation Jump to search 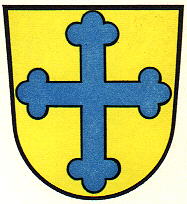 Dülmen received city rights in 1311 from the Bishop of Münster. The oldest seal is already known from 1312 and showed the patron saint of the city, St. Victor. The saint was used in the seals of the city until the late 18th century.

On coins and decorations throughout the city, a shield with the typical cross was used as arms. The cross was derived from the small shield held by St. Victor on the oldest seal. The arms also appear on the seals in the early 19th century and were officially granted in 1947.

From 1939-1945 the city used another coat of arms, showing a gate, symbolising the Lüdinghauser gate in Dülmen.