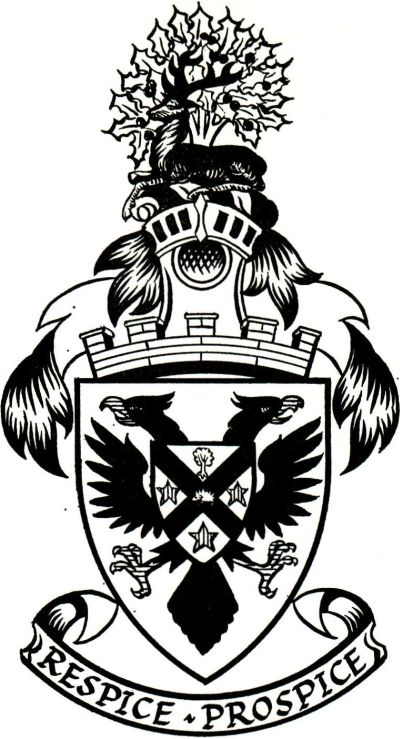 Argent, a double-headed eagle displayed Sable, beaked and membered Azure, bearing on its breast an escutcheon, viz.: Argent, between in chief a birch tree eradicated Proper and three mullets Gules in flanks and base, a saltire Sable charged with an urcheon Or.

Above the Shield is placed a mural crown masoned Sable, thereon a Helmet befitting their degree with a Mantling Sable doubled Argent, and on a Wreath of their Liveries is set for Crest a stag lodged Proper, attired Or, in front of a holly bush fructed Proper, and in an Escrol under the Shield this Motto "Respice Prospice".

Dalbeattie was founded about 1780 by Alexander Copland of King's Grange and George Maxwell of Munches, and quickly developed after the opening of the rich granite quarries there.

The arms follow closely the device on the seal adopted by the Burgh in 1892, which was designed locally by Mr. James Austin. The arms uses as a base the arms of the Maxwell Earls of Nithsdale which form the 1st and 4th quarters of the arms of Maxwell of Munches. The eagle's beaks and claws have been coloured blue instead of red, and the small shield on the eagle's breast shows not only the golden hedgehog of Herries but also retains two features which Mr. Austin had added: a birch tree for Dalbeattie - "valley of the birch" - and three red mullets for Copland of Colliston, a family with many close connections with the Burgh.

The crest of the stag sitting below the bush is that of Maxwell, Earl of Nithsdale and of Maxwell of Munches.

The Latin motto - "Look Backward, Look Forward" - comes from the seal and evidently refers to the eagle looking both ways. 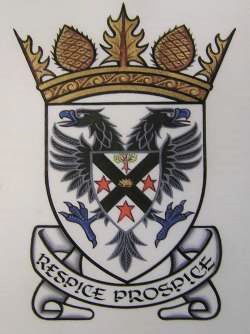 The arms are the Burgh arms, but without crest and with the crown of a community council.