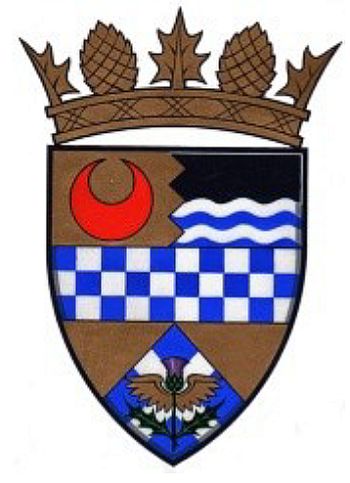 Parted per fess and in chief per pale dancette: 1st, Or, a crescent Gules; 2nd, per fess Sable and harry wavy Argent and Azure; in base Or on a point pointed Azure a saltire Argent surmounted by a thistle slipped and leaved Proper and two wings fessways Or, over all a fess chequy Azure and Argent.

The dancette parting in chief and the gold and black colours represent the Hendersons of Fordell, who had their seat at Fordell Castle from the sixteenth century and who later became enlightened developers of the coal mines on their estates.

The red crescent in the dexter side is a reminder that the Seton, Earls of Dunfermline possessed Dalgety House in the sixteenth and seventeenth centuries; on the sinister side, the black (as well as being for Henderson) represents the land and the silver/blue harry wavy the sea, and is intended to illustrate Dalgety Bay's link with the sea as a foreshore community.

The Stewart fess is for the Earls of Moray, their ownership of Donibristle House from Reformation times and their later acquisition of Dalgety House.

In base, with its unusual charge of "a point pointed", is set the badge of RNAY Donibristle (later HMS Merlin), which was a most prominent and important feature of the area for many years. The Naval Air Station was situated on former Moray land which today forms the Donibristle and Hillend industrial estates.