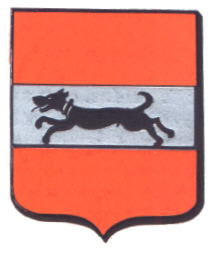 Damme, or Hondsdamme, received city rights in 1180 by Filips of the Alsace, Count of Vlaanderen. The oldest seal of the city shows a ship, probably a Hanseatic kogge. The contra-seal already shows a dog on a bridge with water in the base. The second seal, from around 1300, shows a ship with a flag or banner with the dog. Later selas show either a ship with a banner, or the arms with a dog on a bar. On one seal the chief of the arms shows three fleur-de-lys, probably for the Count of Vlaaderen at the time.

The dog on the silver bar is probably a canting element for the old name, Hondsdamme, hond being Dutch for dog. The name, however, means a dam in/near the Honte river and has nothing to do with dogs.
Ever since the 14th century the arms have remained the same; the colours are known since the late 15th century.

In 1594 the former small cities of Hoeke and Monnikerede were merged with Damme. In the new city council each of the old cities were represented by one person. At the same time a new seal was made :

In 1813 became an independent municipality, Monnikerede by the time had disappeared and the area became part of the municipality of Oostkerke. Both became again part of Damme in 1976.