From Heraldry of the World
Your site history : Daniel Clark
Jump to navigation Jump to search 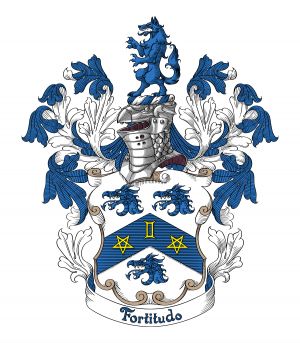 Crest: On a wreath Azure and Argent, a Wolf salient Azure

The three Wyvern heads are traditionally linked with the Clark coat of arms and have been retained not only because of this tradition but also because of its long and historic symbolism.

The use of the astrological sign of Gemini represents the zodiac under which the owner resides while the inverted Pentagrams represent a life's interest in the esoteric/occult and a pursuit of lost or hidden knowledge, both historical and mythological.

The Wolf Crest represents the spirit and strength to stand outside of a caged mentality, to trust instinct and hunt wisdom. It also represents guardianship and loyalty.

The Motto Fortitudo (or courage) is the traditional Clark motto