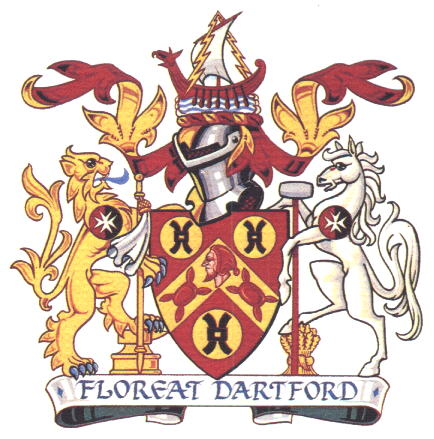 The chevron represents the bridge over the Darent, from which the name Dartford is derived. The chevron signifies a bridge between the three former councils, which are symbolised by the golden discs.

The jester's head in a fool's cap symbolises the paper industry, founded in Dartford in the 16th century. The two sacks represent the cement industry in Swanscombe. The mill rinds on the discs portray the milling of flour while the tabloid form of the discs themselves represent the pharmaceutical industry.

The ancient galley in the crest was one of those seen from Galley Hill sailing up the Thames in historical times. The type of ship was chosen as a reminder of the past Roman civilisation of the district. The seven oars represent Dartford and the six parishes in the district. The lightning symbolises the Littlebrook Power Station.

The supporters the lion of England and the horse of Kent. The lion is taken as a symbol for the long relations between the Kings and Dartford. King Henry III's sister was married in the district to the Holy Roman Emperor, Edward III founded a priory in the district, which is further emphasised by the Prioress's staff held by the lion. The lion stands on an anvil representing the engineering industries. Many of these industries occupy the lands of the former priory. Finally Queen Elizabeth I often stayed in a Manor in Dartford.

The horse symbolises the relation with Kent. Between its front paws is a long hammer, the symbol of Wat Tylor, citizen of Dartford, who led the Kentish peasants in a revolt against unjust taxes. The horse stands on a garb of wheat, symbolising the agricultural character of a large part of the district.

Both supporters wear a shoulder badge with the cross of St. John, badge of the Knights Hospitaller, who had a commandery in Sutton-at-Hone. The motto Floreat Drtford is adopted from a school song written in the 16th century. 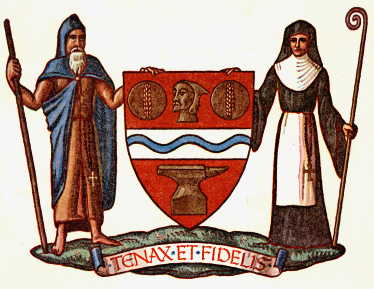 Arms : Gules on a Fess Argent between in chief a Jester's Head habited in a Fool's Cap couped at the neck Or between two Bezants each charged with an Ear of Wheat proper and in base an Anvil of the third a Barrulet wavy Azure.
Supporters : On the dexter side a Hermit holding in the exterior hand a Staff and on the sinister side a Prioress holding in the exterior hand a Pastoral Staff proper.
Motto: 'TENAX ET FIDELIS' - Steadfast and faithful

The arms were officially granted on September 4, 1933.

The blue wave on the white fess represents the River Darent, from which the town of Dartford took its name. The paper-making industry is repre­sented by the jester's head wearing a Fool's Cap. It is of interest in this connection to note that the emblem is found as a water-mark in paper as early as the reign of King Charles II. On either side are golden roundels, which are as near as heraldry permits to get to the familiar tabloids of our chemical factories. These are charged with ears of wheat, symbolizing another of the staple industries of the borough.

The golden anvil at the base of the shield is emblematical of the great engineering and metal-working interests.

The hermit typifies those recluses who, by their holy lives and untiring devotion to the cause of humanity, set a noble example for all time. It may, moreover, be recalled that it was through their exertions that funds were obtained for erecting the first bridge over the Darent. The earliest hermit of whom there is any record, John Sodeman by name, under the title of 'Hermit of the Chapel of the Blessed Virgin and Martyr, St Katherine of Dertford, for reformation of the poor', obtained Letters of Indulgence from the Bishop of the Diocese on the1st of June 1438. The prioress recalls the Augustinian nunnery that was established by King Edward III in 1355.