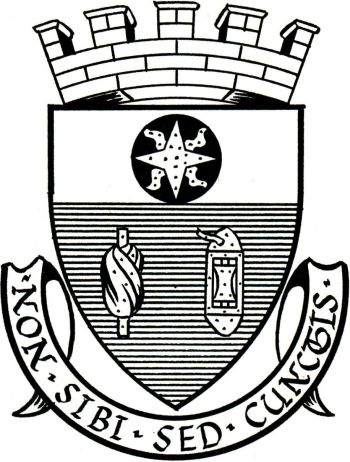 Azure, a distaff and a shuttle paleways in fess Or; on a chief Argent, a roundel Sable, charged with an estoile of the Second.

Below the Shield which is ensigned with the coronet proper to a Burgh is placed in an Escrol this Motto "Non Sibi Sed Cunctis".

The arms are a heraldic version of the device on the 1893 Burgh seal. The livery colours appear to have no special significance, the distaff and shuttle represent the weaving industry (mostly lace and madras manufacturing) and the black roundel with its golden estoile a local variety of lamp called a "crusie".

The black and silver colours in the chief could also allude to the banner of the Knights Templar.

The Latin motto-"Not for themselves but for all"-comes from the seal.