From Heraldry of the World
Your site history : Darwen
Jump to navigation Jump to search

Incorporated into : 1974 Blackburn with Darwen 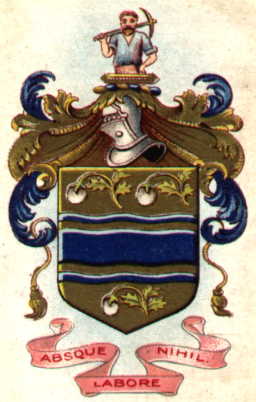 Arms : Or a Fesse wavy with Cottices also wavy Azure between three Sprigs of the Cotton Tree slipped and fructed proper.
Crest : On Wreath of the Coloursin front of a demi Miner habited proper holding over the shoulder a Pick Or a Shuttle fessewise of the last thread pendant proper.
Motto: 'ABSQUE LABORE NIHIL' - Nothing without labour.

The arms were officially granted on August 7, 1878.

The wavy bar represents the River Darwen. The cotton, shuttle and miner refer to local industries.