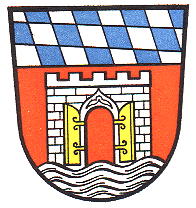 The arms were officially granted on February 23, 1939.

Deggendorf received city rights in 1316 and the present arms, which were granted in 1936, are based on the oldest seal, which dates from the early 14th century. The arms show the Donau river, with the gate as a symbol for the new city and the head showing the arms of the Wittelsbach family (see Bayern), as overlords.

Later seals show many variations on the arms, without the waves, with smaller towers attached and many different styles.

Nevertheless, the basic composition remained the same. See for example the arms shown by Hupp below: