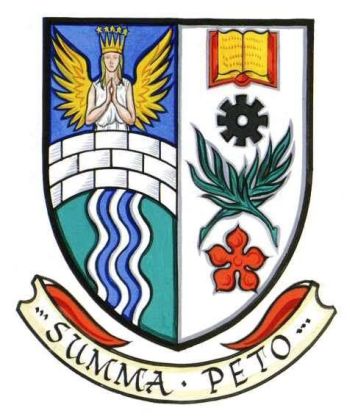 Parted per pale, dexter, per fess Azure and Vert, between a fess enarched Argent, masoned Sable, a demi-angel issuant from the fess Proper, attired Argent, celestially crowned and wings elevated Or, and in base a pale wavy Argent charged of two pallets wavy Azure; sinister, Argent, between a roundel embattled Sable voided of the field, in the honour point and a cinquefoil Gules in base, two palm branches slipped saltirewise Vert, and in chief an open book Or, fore-edges and binding Gules.
Motto : Summa Peto

The design of the arms is divided per pale, which is the usual practice for a town school, with a version of the arms of the Burgh of Denny and Dunipace on the dexter side, and charges relevant to the school on the sinister side.

On account of the narrower half shield, the angel's palm branches of the original burgh arms (granted in 1956) have been moved to the opposite side of the shield and placed between a book and a cogwheel, for education, and a cinquefoil.

The flower references the gillyflower of the Livingstones, who owned land in the Denny area from the early 17th century.