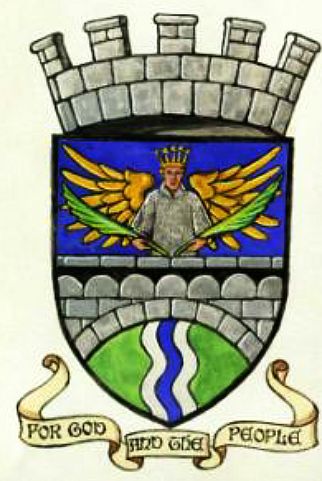 Per fess Azure and Vert: an arched bridge Argent, masoned Sable, charged in fess with a barrulet of the Last, engrailed on its lower edge, all between an angel Proper, attired of the Third, the wings displayed Or, and celestially crowned of the Last, holding in either hand a palm branch of the Second, issuant from the bridge in chief; and in base a pale wavy of the Third, charged with a pallet wavy of the First.

And in an Escrol below the Shield which is ensigned of a Burgh coronet this Motto "For God and the People".

By request of the Town Council, the arms closely resemble the device on the 1892 Burgh seal.

The angel of peace is very appropriate since the district is said to have been the setting for three important treaties in Scottish history: that between the Caledonii and the Roman Emperor Severus in the third century A.D.; a parley between Sir William Wallace and Robert the Bruce after the Battle of Falkirk in 1298; the signing in 1301 by King Edward I of England of a warrant authorising a truce with Scotland.

The angel is placed above the bridge over the River Carron which flows between Denny and Dunipace; the bridge is charged with a black engrailed barrulet to recall the connection of the Sinclair (or St. Clair) Earls of Orkney, with the neighbouring Barony and Castle of Herbertshire.

The blue and green background is for the sky and the land, while the motto comes from the Burgh seal.