From Heraldry of the World
Your site history : Derbyshire
Jump to navigation Jump to search 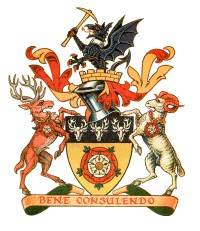 The arms were officially granted on September 17, 1937. The supporters and crest were granted in 1975.

The arms show a Tudor rose with three stags' heads above. The rose was taken from the centuries old badge, and the stags' heads from the Cavendish arms by permission of the Duke of Devonshire

The supporters, a stag and a ram, have special significance for Derbyshire. Deer are closely associated with the county, founded by Danish invaders of the ninth century, who named their first fort, Derby, for the wild deer that were so abundant in the area. Sheep were introduced in the New Stone Age. They were the foundation of local farming, and later provided raw materials of early cloth and leather industry on which the county's towns were based.

The ram is the county's regimental mascot. The dragon crest, with metal collar and pick, symbolises the county's foundation by Danes, men of dragon ships, and the county's mining and engineering enterprise. Dragons traditionally amass underground and guard great mineral wealth.