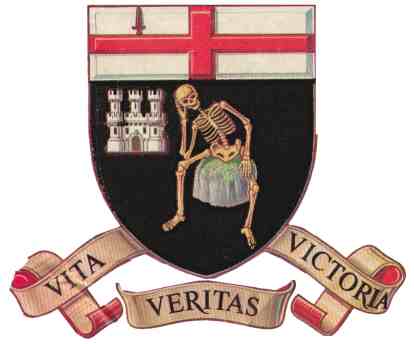 Arms : Sable, a human skeleton Or seated upon a mossy stone proper and in dexter chief a castle triple towered argent on a chief also argent a cross gules thereon a harp or and in the first quarter a sword erect gules.
Motto: Vita, veritas, victoria

The devices an Derry's arms are a skeleton, a three-towered castle and a red cross and sword. The sword and cross are devices of the City of London and show the link between the two cities. The castle is thought to relate to a 13th or 14th century keep belonging to the local native chieftains. There a many theories about the skeleton. The most popular one is that it is that of a Norman knight who was starved to death in the castle dungeons in 1332.