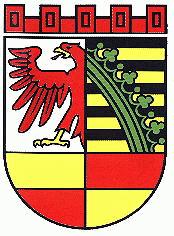 In 1933 the city added a small escutcheon with the local church, as the oldest seals of the city showed the church. These arms, which were never officially granted, were in use until 1951, see image below.