From Heraldry of the World
Your site history : Destroyer USS Cole
Jump to navigation Jump to search 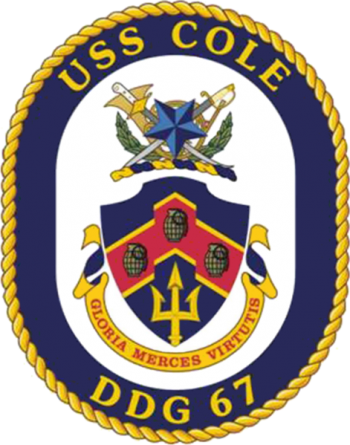 SHIELD: Azure, a chevron rompu Gules fimbriated Or charged with three hand grenades Proper, issuance from base a demi-trident of the third.

CREST: From a wreath Or and Azure and flanked on either side by a laurel branch, a French horn surmounted by a Marine Mameluke and Navy sword saltirewise points down Proper, overall a mullet inverted Celeste.

MOTTO: GLORIA MERCES VIRTUTIS (GLORY IS THE REWARD OF VALOR)

SEAL: The arms as blazoned in full color upon a white oval enclosed by a dark blue collar edged on the outside with a gold rope and bearing the inscription “USS COLE” at top and “DDG 67” in base all in gold.

SHIELD: Dark blue and gold represent the sea and excellence and are traditionally associated with the Navy. Red, for blood and courage, denotes valor and sacrifice. The trident symbolizes sea prowess and DDG 67’s modern warfare capabilities of the Aegis and Vertical Launch systems. The three tines represent submarine, surface and air strike capabilities. The three hand grenades commemorate Sergeant Cole’s heroic one-man grenade attack against the enemy emplacements during the assault on Iwo Jima. Three times, under fierce hostile fire, he assaulted their position destroying the enemy stronghold. When returning to his squad, he himself was killed by a grenade. The broken chevron, or wedge, alludes to Sergeant Cole’s breaking the enemy’s hold, enabling his company to attain its ultimate objective. The three grenades also represent the traits courage, valor and honor, commemorating Sergeant Cole’s fighting spirit and dedication. CREST: The blue reversed star highlights the Medal of Honor posthumously awarded to Sergeant Darrell Samuel Cole for his self-sacrifice and extraordinary heroism. The crossed Marine Mameluke and Navy sword signify cooperation and reflects the fighting spirit. The French honor underscores his service with the Marine Corps as Field Music and is combined with the swords to symbolize his nickname, “The Fighting Field Music.” The laurel wreath is emblematic of honor and high achievement.