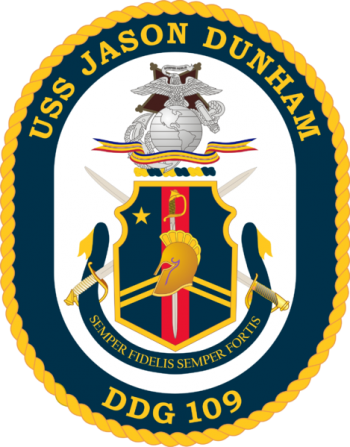 Shield:Azure in base two chevronels Or, on a pale Gules an unsheated enlisted sword point down Proper, overall a crested helmed of antiquity of the second garnished Purpure, in dexter chief a mullet Or, a brodure of the last. Crest: on a wreath Or and Azure the inverted star of the Medla of Honor Proper surmounted by the Marine Corps eagle, globe and anchor insignia Argent intertwining in base the combat Action ribbon Proper

The two cevronels recall Jason Dunham's rank as Corporal in the US Marine Corps. The Red pale denote the trouser stripe worn by Non Commissioned Officers. The Swor point down represent Corporal Dunham giving his lift to protect his troops. The antique helmet recalls the service traditions and the incident when Corporal Dunham used his own helmet to contain a grenade thrown at his Squad, thereby giving his own life. The Pruple lining represent the Purple Heart award. The Shape of the Shield recalls that of the State of New York, Jason Dunham's home State. The Crest shows the US Marine Corps insigna and the awards given to Corporal Dunham.