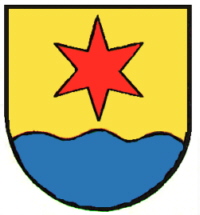 The blue river refers both to the last syllable of the name of the village and to the legendary "Bottomless Lake". The star is to remind of the Lords of Neuneck, who owned the village between 1596 and 1620 and who had a golden star in a red field upon their coat of arms. In order to correspond with the heraldic colour rule, which does not allow a red field above a blue river, the Neuneckian colors were switched.

In the process of adopting a coat of arms, two other proposals were made, both showing water-lily leaves as a symbol for the lake :