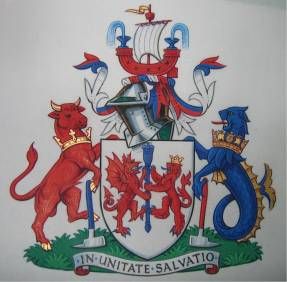 Argent a Mace Azure held on the dexter by a Dragon rampant Gules and on the sinister by a Lion rampant also Gules ducally crowned Or. The Crest is On a Wreath Argent Gules and Azure A Lymphad Gules sail Argent pennant Or on the prow and stern a Fountain playing outwards Azure. The Supporters are Upon a Compartment Vert on the dexter a Bull armed and gorged with a Saxon Crown Or the dexter forehoof resting on a Fireman’s Axe head downwards Argent shaft Azure and on the sinister a Sealion finned and gorged with a Naval Crown Or the sinister foot resting on a Fireman’s Axe head downwards Argent shaft Gules.

The arms were officially granted on April 2, 2007.