From Heraldry of the World
Your site history : Dieburg
Jump to navigation Jump to search 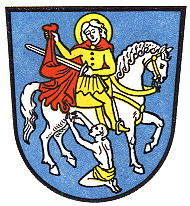 Dieburg recieved city rights in 1277. All seals of the city have shown the patron saint, Saint Martin. The saint is also the patron saint of the diocese of Mainz, to which Dieburg belonged from 1294-1802. The only seal that did not show St. Martin dates from the 18th century and shows a D surrounded by three stars. The present arms were based on the old seals and officially granted in 1952.