From Heraldry of the World
Your site history : Dieburg (kreis)
Jump to navigation Jump to search 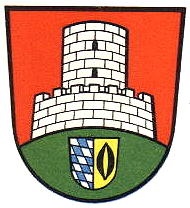 The castle is the Otzberg fortress, which is built on the highest point in the district. The small shield in the base of the arms shows the 17th century arms of the Otzberg Amt, a territory of the Palatinate (Pfalz). It shows the diamonds of the Wittelsbach dynasty as well as the letter O.