From Heraldry of the World
Your site history : Diekirch
Jump to navigation Jump to search 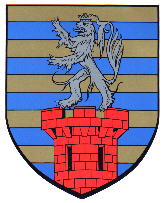 The arms are based on the 14th century seal and arms of the city. This seal showed already a shield with a lion on a castle, the whole on a field with 13 bars. During the centuries the composition remained the same, but different colours have been used, the lion has been crowned or shown without crown, and several other minor variations existed. So in 1988 the arms were formally described.