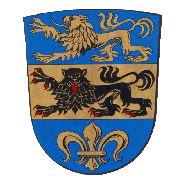 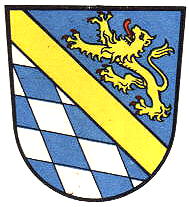 The lion and the bar are taken from the arms of the former Counts of Dillingen, who used arms with a lion on both sides of the bar. The lower part shows the arms of the Wittelsbach family and symbolises that a large part of the district historically belonged to the Pfalz and later to Bayern. The Wittelsbach family were Kings of Bayern and Counts of the Pfalz (Palatinate).