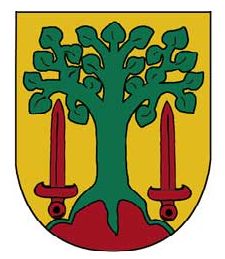 The arms are canting; Dingden means the place where a thing was held, an pre- and early medieval local court. These courts were preferable held under oak trees, hence the oak in the arms. The two swords symbolise justice.