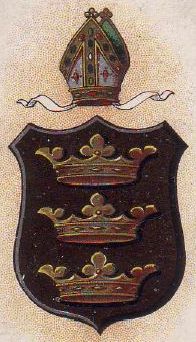 The See of Bristol was founded by Letters Patent, 5th June 1542. The significance of these arms is not clear, but were already used by the St. Augustine Abbey, the origin of the cathedral church, and probably indicate the Holy Trinity of the Three Kings. The abbey was founded in 1142.