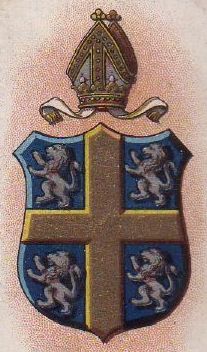 Azure, a cross Or between four lions rampant argent.

The arms were recorded at the College of Arms in 1530, but were already used by the Catholic Bishops.

Arms with the field red and the cross and lions silver is also said to be the Arms of St. Denys bishop and martyr. The Bishop of Durham alone among English Bishops has the right to have a coronet about the rim of the mitre. This in remembrance of the Palatine authority exercised by the Bishops until 1835.