Country : United Kingdom
Denomination : Anglican (until 1560/69 Roman Catholic)
Established : 850 as Diocese of St Germans, translated to Crediton 909 and to Exeter in 1050 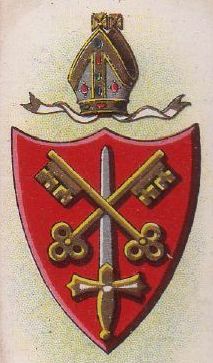 Gules, a sword erect in pale argent, hilted Or, surmounted of two keys addorsed in saltire, wards in chief, of the last.

The keys and sword alludes to the dedication of the Cathedral to SS. Peter and Paul. The arms took it present form during the Episcopate of John Boothe (1465-1478), although many variations of the arms can be found in the cathedral and churches in the diocese.