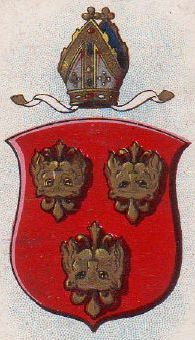 Gules three Leopards' Faces reversed jessant-de-Lis two and one Or.

The arms are base on the arms of the powerful House of Cantilupe from which came Thomas de Cantilupe, Bishop of Hereford from 1275 to 1282. Adam Orlton, the next bishop but one after him, had two such fleurs-de-lis engraved in his seal, and after his time these arms came to be regarded as the arms of the See.

The leopards' heads are usually drawn reversed, but there is good reason for believing that they are nothing more than a decorative elaboration of the ball or knop from which the leaves of the flowers spring. The earliest examples of the arms of Cantilupe show three golden fleurs-de-lis on red, and the seal of a fifteenth-century Bishop of Hereford gives them in the shield of the See with very large plain knops. But usage has decided that the knops shall be leopards' heads reversed.