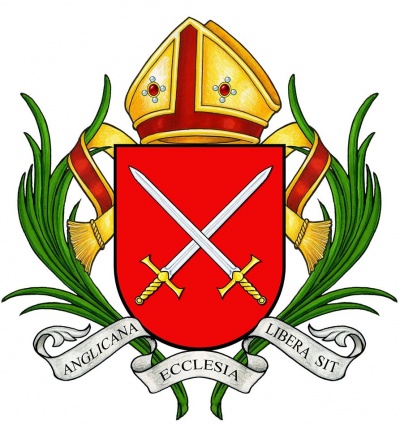 Gules, two swords in saltire proper, hilts and pommels Or.

The first appearance of these arms is on the seal of Ralph Stratford (1340-54) although several of his predecessors since Bishop FitzNeal (1169-98) introduced into their seals the effigy of St. Paul, the patron of the cathedral, with his emblems of book and sword. The sword is the emblem of St. Paul with reference in the first instance to the manner of his death; it has also the secondary significance of his having wielded the Sword of the Spirit. In the Middle Ages it became customary to explain its constant association with this saint by his having been a Roman soldier. The usual explanation of the two swords is that one represents his martyrdom, the other his power as a teacher.

© since 1995, Heraldry of the World, Ralf Hartemink Image from Massimo Ghirardi, 2015