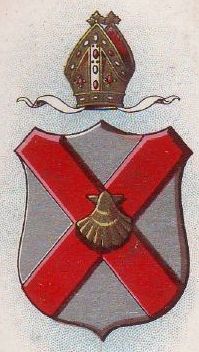 Argent, on a saltire gules an escallop Or.

The arms are recorded at the College of Arms.

The arms shows the cross of St. Andrew. The original dedication of the cathedral was to St. Andrew and on the early seals of the Priory the effigy of that Apostle on his cross is to be found. The arms of the Cathedral Priory were the same as those of the diocese omitting the escallop shell.

The meaning of the shell is lost in obscurity though it may indicate St. Andrew's occupation as a fisherman. It has also been suggested that it may refer to the oyster fisheries of the diocese. It can also be regarded as a symbol of pilgrimage as offerings at the shrine of St. William of Perth in the Cathedral financed the rebuilding of the Choir; scallops being the symbol of pilgrimage.