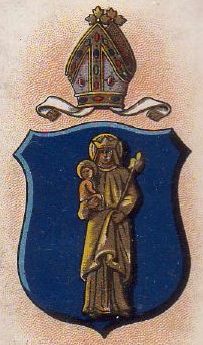 Azure, Our Lady crowned, holding in her dexter arm the Infant Jesus, in her sinister hand a sceptre Or, round both heads circles of glory of the last.

The arms were recorded at the College of Arms, and were already used in the 15th century.

The dedication of the cathedral is to the Blessed Virgin Mary and this is echoed in the arms. Her figure with the child appears full length but seated on the seal of Richard Mitford (1395-1407); they also appear, half-length, on the small counterseals of Robert Bingham (1229-46) and Robert Wickhampton (1274-84). Seated they form part of the main device of the seals of Robert Hallam (1375-1407) and Richard Beauchamp; and half-length occur in the upper portion of that of Lorenzo, Cardinal Campeggio (1525-34). After the reformation she is seen again in full-length.

© since 1995, Heraldry of the World, Ralf Hartemink Image from Wills's Arms of the Bishopric. Briggs, 1963.