Diocese of Sodor and Man

DIOCESE OF SODOR AND MAN 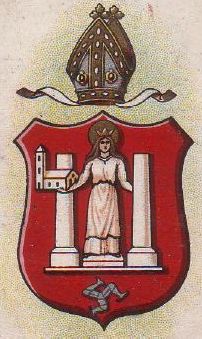 The Figure between the Pillars have in Modern Times been described as the Blessed Virgin, but originally is thought to represent St. German,
who become a chief supporter of the British Church against the Heresy of Pelagius. The Triskele (Armoured Legs) are from the Arms of the Isle of Man.

Literature: Image from Wills's Arms of the Bishopric.