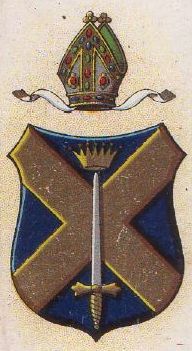 Azure, a saltire Or, over all a sword erect in pale proper, pomel and hilt of the second, in chief a celestial crown gold.

The Diocese of St. Albans was formed to cater for the great increase of population in the districts adjoining London by means of a rearrangement of the diocesan boundaries of Rochester, Winchester and London. The diocese was constituted by Order in Council of 30 April 1877.

The arms are based upon those of the former Abbey (now the Cathedral Church) with the addition of the crown and sword of martyrdom of the patron St. Alban. The Abbey arms, which are those attributed to St. Alban, consist of the saltire of the Kingdom of Mercia and commemorate Offa, King of Mercia, who founded the Abbey in expiation of the murder of St. Ethelbert, King of the East Angles.

Literature: Image from Wills's Arms of the Bishopric. Briggs; 1963