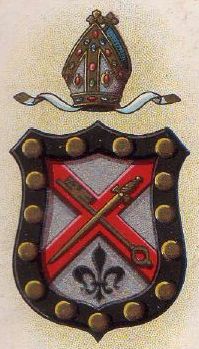 Argent, on a saltire gules a key, ward upwards, surmounted by a sword, point downwards, saltirewise Or, in base a fleur-de-lis sable; a bordure of the last charged with fifteen bezants.

The arms refer to the history of the diocese. The saltire, which is that of St. Patrick, has been taken in modern times to represent the Celtic church. The sword and key in saltire are taken from a shield in the church at St. German's, the old seat of the bishopric. The fleur-de-lis refers to the transfer of the see to the church of St. Mary at Truro. The bordure indicates the identity of the diocese with the county of Cornwall, as it is composed of the arms of the Duchy.

Literature: Image from Wills's Arms of the Bishopric. Briggs, 1964