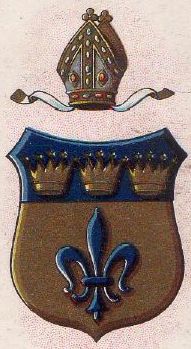 Or, a fteur-de-lis azure; on a chief of the last three celestial crowns of the field.

The Field is from the Arms of the City of Wakefield in reversed tinctures, the City has a gold Fleur-de-lis on a blue Field. The Crowns on the Chief,
alludes to the dedication of the Cathedral in honour of All Saints.

Literature: Image from Wills's Arms of the Bishopric. McCarthy: Armoria Sedium; E.E. Dorling: Heraldry of the Chruch a Handbook.