Established : 634 as the Bishopric of the West Saxons
Renamed to Diocese of in Winchester 662 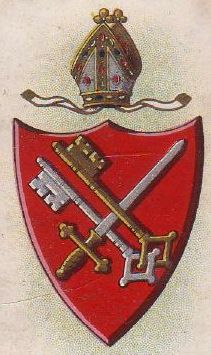 Gules, two keys, endorsed and conjoined at the bows, in bend, wards in chief, the uppermost Or, the lower argent, a sword, the point in chief, interposed between them in bend sinister of the third, pomel and hilt gold.

The arms are combining the symbols of St. Peter (keys) and St. Paul (sword), the patron saints of the cathedral and diocese.

Literature: Image from Wills's Arms of the Bishopric.