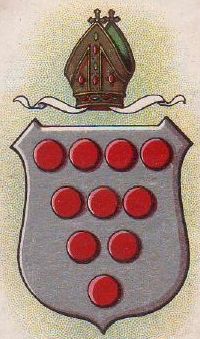 This see dates from the division of the See of Lichfield in 679 or 680 when a separate diocese was formed for the Hwiccas, which tribal bishopric ultimately became that of Worcester. The small religious house of St. Peter, founded by Saxulph, was chosen as the seat of the bishopric. In the tenth century a connection between the archbishopric of York and the bishopric of Worcester grew up; four of the bishops held the See in plurality with York. St. Oswald (961-2) absorbed the old secular cathedral of St. Peter into the renewed Benedictine church of St. Mary, which by inheritance is now the cathedral. This church, completed in 983, had in a century given way to a new church built by Wulfstan II (1062-95).

These arms may have been those of Bishop Walter Giffard as they are to be found in a Roll of Arms of Edward I (Harl. MS. 6137) as the coat of the Bishop's elder brother Sir Alexander Giffard. They are first found on the episcopal seal of Thomas Peverall (1407-19) though they also occur on the fourteenth century seal of the Hospital of St. Wulstan at Worcester. They could then have been taken by the See to commemorate either St. Wulstan or Bishop Giffard in the same way that the arms of St. Thomas de Cantelupe were made to serve for Hereford.

There is an old legend that the roundels represent the sacred Host, from the Bishop of Worcester's privilege of celebrating Mass in the presence of the College of Bishops.