From Heraldry of the World
Your site history : Donegal (county)
Jump to navigation Jump to search 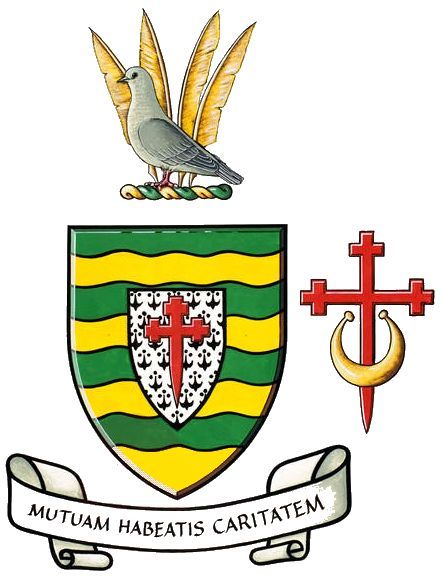 Barry wavy of eight vert and or, on an inescutcheon ermine a cross crosslet fitchee gules, with the Crest: in front of four guilt pens erect points downwards or a dove proper, mantled gules doubled argent with the Motto: Mutuam habeatis caritatem.

The arms are symbolical of both the nature of the County and its history. The wavy bars represent the green hills and golden strands and, by inference, the surrounding sea, while the small shield in the centre, with its royal ermine, stands for the ancient Kingdom of Aileach and, with the cross of the O'Donnells, signifies the two components of the County - Inishowen and Tir Chonaill. The crest above the shield displays a dove for St. Colmcille. The four quills represent the Four Masters. The last words of St. Colmcille, recorded by St. Eunan in his life of St. Colmcille, were advice to his monks "Inter vos mutuam habectis caritatem" (Maintain among you mutual love or charity). From these words the motto "Mutuam habeatis caritatem" has been devised.