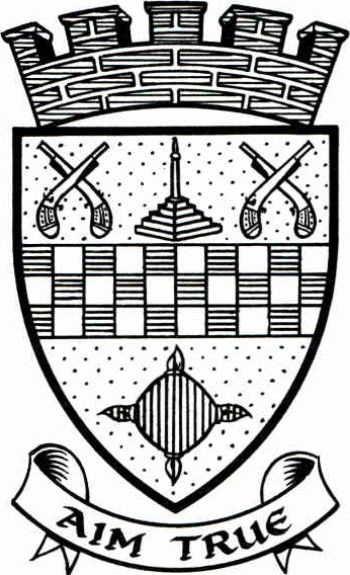 Or, a fess chequy Azure and Argent, in chief a representation of the Mercat Cross of Doune between two pairs of pistols in salt ire muzzles uppermost all Proper, and in base a cushion Gules.

Below the Shield, which is ensigned of a burghal coronet suitable to a Police Burgh (viz., Azure masoned Argent), is placed in an Escrol this MottoAim True.

The arms are appropriately based on those of Stewart with a Moray red cushion added in base. In chief are the main features on the device on the Burgh seal: the Mercat Cross of the Burgh, with a pair of crossed pistols on either side to recall the celebrated Doune pistolmakers of the seventeenth and eighteenth centuries.