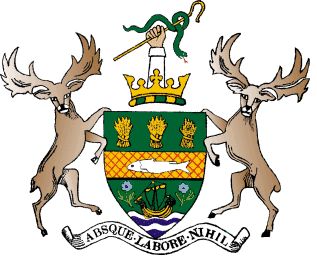 Arms : Vert, on a fess Or fretty gules a fish naiant argent, in chief three garbs Or and in base on water harry wavy of four argent and azure a lymphad, sail furled, pennon and fiags flying, Or between two fiax flowers slipped and leaved proper.
Crest: On a wreath of the colours, Out of an ancient crown a dexter cubit arm, vested and cuffed argent, the hand proper grasping a Celtic crozier Or, looped about the shaft a snake, head downwards and to the sinister, vert.
Supporters: On either side an Irish elk guardant proper.
Motto: Absque labore nihil.

The arms were officially granted on December 15, 1967.

The arms combine emblems of the economic activities in Down. The fretty fess charged with a fish is a clear reference to fishing. The garbs in chief are for agriculture, while the flax flowers are for the linen industry. The arms are completed by a lymphad or ancient ship which replaces the three masted ship of the previous unofficial arms, and stands for the maritime interests of County Down.

The crest represents St. Patrick who has many associations with the county, not least his reputed burial place in the county capital, Downpatrick.

The supporters are Irish Elks or Giant Deer. The animal became extinct 10,000 years ago, but its remains, in particular the skull with magnificent antlers, are often unearthed throughout Ireland.

The motto can be translated as “Without work, nothing”.

Literature: Image and information provided by Laurence Jones from the County Down Handbook.