From Heraldry of the World
Your site history : Downham
Jump to navigation Jump to search 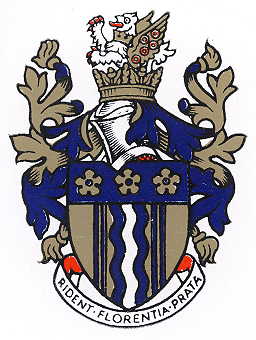 Arms : Or on a Pale wavy double plain cotised Azure a pallet wavy Argent a Chief Azure thereon three pierced Cinquefoils Or.
Crest : Out of a Coronet composed of four Ears of Wheat and four Acorns leaved set alternately upon a Rim Or a winged demi Lion Argent the wings Or semée of Annulets Gules ducally gorged Or.
Motto: 'RIDENT FLORENTIA PRATA'-Our flowering fields rejoice

The wavy pale represents the River Great Ouse, largest and longest of the fenland rivers and the wavy pallet represents the River Little Ouse, which formed a boundry of the district. By contrast the straight lines sybolise the artificial cuts and drains which criss cross this landscape. The three gold peireced cinquefoils on blue are derived from the arms of the Lords Bardolph of Wormgay, who for generations following the Norman Conquest were successive Lords of the Manor of Wormegay in the north of the district. They owned other large estates in the area, including the nearby Manor of Stow to which they suffixed the name of Bardolph.

The coronet represents the countryside and agriculture. Out of this rises the white lion, with a crown around its neck and gold wings charged with red rings. The lion is from the crest of the Hare family and the wings from the heraldry of the Bagges, they are combined in reference to the great part played by these families in the life of the district and the Council.