From Heraldry of the World
Your site history : Dransfeld
Jump to navigation Jump to search 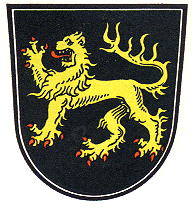 
In the 19th century the city used more elaborate armorial bearings with a crest with a letter D. In the early 20th century the arms were shown in the colours of Braunschweig, see below.