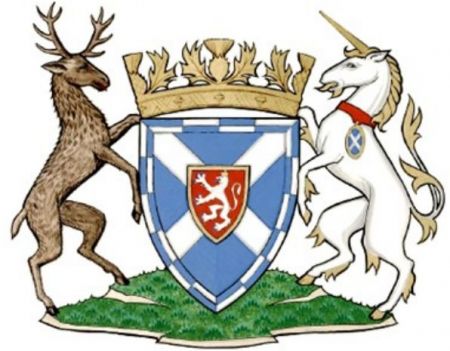 Azure, a saltire Argent, surmounted at the fess point by an inescutcheon Gules, fimbriated Or, and charged with a lion rampant Argent crowned Or, a bordure counter-compony of the First and Second.

Above the Shield is placed a Coronet appropriate to a statutory Area Council, videlicet:- issuant from a circlet eight paling piles (three and two halves visible) Or and eight garbs (four visible) of the Last, banded Sable; on a Compartment below the Shield are set for Supporters, dexter, a stag Proper and sinister, a unicorn Argent, armed, maned and unguled Or and gorged with a collar Gules, from which is pendant an oval badge Azure, fimbriated Or, charged with a saltire Argent, and in an Escrol below the same this Motto "Quinque Uniter".

The arms are those of the former Regional Council, see below, with the addition of a motto.

The motto - "Five in Unity", recalls the former Regional and District Councils. 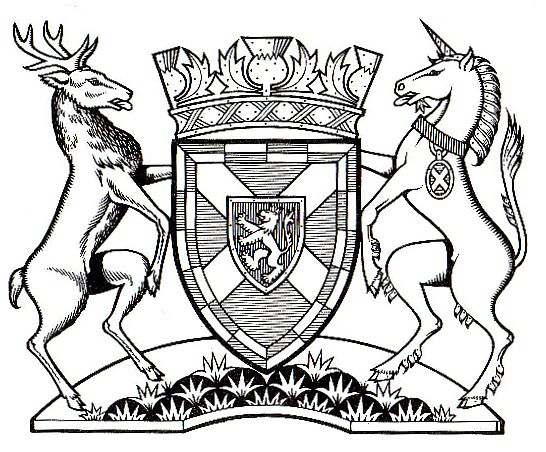 The arms shows a St. Andrew's cross for Scotland within a bordure and a red esutcheon. The lion on the escutcheon is the silver lion of Galloway. The supporters are the unicorn common to all Regional Councils, and a stag in its natural colours which comes from the arms of Maxwell, Earl of Nithsdale. Above the shield is the coronet common to all Area Councils, made up of eight gold triangles representing paling or fencing and eight golden sheaves of grain tied about the middle with black twine.

A scroll beneath the shield bears the motto Quinque Uniter (Five into One). Adopted by Dumfries and Galloway Council to symbolise the coming together of the former Regional Council and four District Councils, Qunique Uniter was the motto of Annandale and Eskdale District Council.

Literature : Information provided by the Dumfries and Galloway council : http://www.dumgal.gov.uk