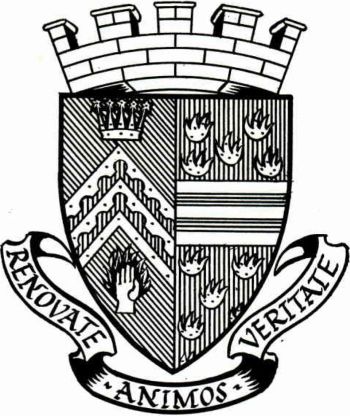 Parted per pale: dexter, Vert, on a chevron between a celestial crown in chief Or, and a dexter hand couped in base Argent, the fingers enflamed Proper, two chevronels round-embattled on their upper edges Gules; sinister, Gules, semee of !owes of flame Or, on a fess Argent, two barrulets Azure.

Below the Shield which is ensigned of a coronet appropriate to a Burgh is placed in an Escrol this Motto "Renovate Animos Veritate".

Dunblane is said to have been made a City by King James I (1406-1437), but it may have been a Burgh from the middle of the thirteenth century.

The arms are a heraldic rendering of the old Burgh seal which was, itself, an adaptation of an ancient seal of the Burgh which shows St. Lawrence and St. Blane within a shrine, and of which an impression of the thirteenth or fourteenth century is on record.

The dexter side has been accorded to St. Blane. The green field (for Dalriada) recalls the Celtic Church of Dunblane and that the Church of Dunblane is mentioned in the Pictish Chronicle under the reign of King Kenneth MacAlpin (843-858); the crown and the enflamed fingers recall two legends about St. Blane; he is said to have worn a crown and not a mitre in the services of the Church, and on one occasion, to have sparked flames from his fingers to keep monastery fires alight..
The hand is coloured silver to show that he was a confessor.
The gold chevron and the red chevronels recall the arms of the ancient Earldom of Strathearn, the latter being round-embattled to recall Dunblane Cathedral.

The sinister side is for St. Lawrence, who represents the Roman Church at Dunblane; he is symbolised by his traditional red tunic powdered over with "lowes of flame", while the silver and blue fess is for the gridiron on which he suffered martyrdom.

The Latin motto Renew your courage with truth was chosen as a reference to the association of the Hays of Kinnoull with Dunblane: their motto is "Renovate Animos".