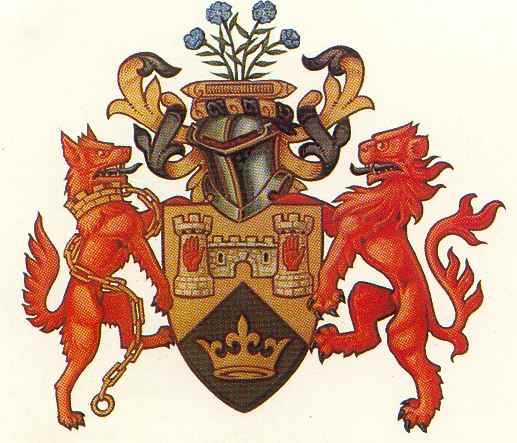 In the design of the arms certain historical factors associated with the area were included. The arms divided by chevron and coloured gold and black, bear a castle with towers charged with a red right hand emphasising that Dungannon, that is 'Fort of Gannon', was a stronghold of the O'Neils. Below on a black division has been set an ancient crown and this alludes to the Knockmany Chambered Cairn which according to Meek's account received its name because it was the hill on which Queen Baine, wife of King Tuathal Techtmar was buried. The crown on the black background denotes the royal burial.

Above the shield and set upon the helmet are the shuttle, denoting the association with the local linen industry and four flax stalks one for each of the four former Districts.

On either side of the shield are the supporters, the red lion for O'Neil and on the right a wolf for Chichester. These commemorate the important association of these two families, as it was to Chichester that the King in 1612 granted a charter of incorporation for the town. Under the Arms is displayed a Badge composed of four red crowns (civic authority) linked with a golden chain within which is set a dexter red hand.