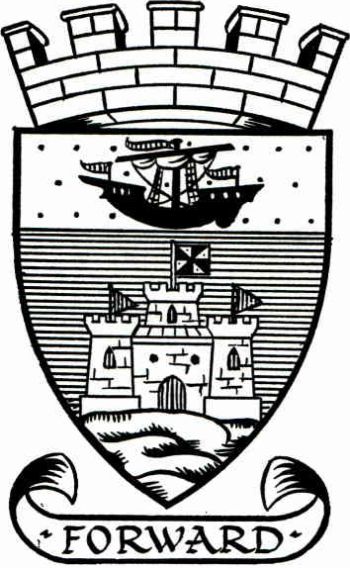 Azure, on a rock in base Proper, a castle triple-towered Argent, masoned Sable, windows, port and flags Gules, and flying from the centre tower a banner charged with a gyronny of eight Or and of the Third; on a chief Gold, a galley also of the Third, sail furled Proper, flagged of the Fourth.

Above the Shield is placed a mural crown and in an Escrol below the Shield this Motto "Forward".

The arms, based on the device on the Burgh seal, show the ancient Royal Castle of Dunoon with a banner showing the Campbell gyronny, since the Campbells of Lochow and their descendants, the Earls and Dukes of Argyll, have been the Heredi­tary Keepers of the Castle since 1370.

The red windows and doors show that it is a Royal castle and the blue field is for the sea and sky.

The Campbell colours are repeated in the chief where the galley recalls the Clyde steamer shown on the Burgh seal, from which the motto also comes.