From Heraldry of the World
Your site history : Durham (County)
Jump to navigation Jump to search 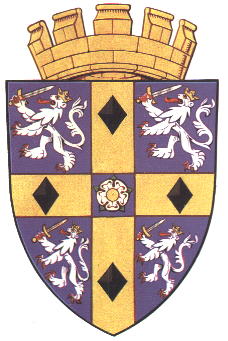 Azure Or a Cross Or square pierced of the field between four Lions rampant Argent each ducally crowned Gold and grasping in the dexter claw a Sword in bend sinister proper pommel and hilt also Gold as many Lozenges Sable in the fess point a Rose Argent barbed and seeded proper; the Shield ensigned with a Mural Crown Gold.

The arms are based on those granted to the former Durham County Council on 30th May, 1961, see below. As a change for the new parts of the county added in 1974, the central lozenge in the former County Council's arms has been replaced by a white rose. 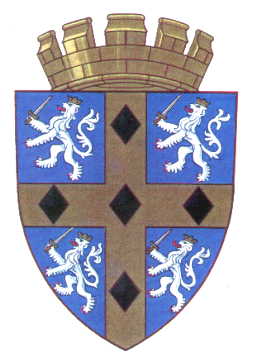 Azure on a Cross Or between four Lions rampant Argent each ducally crowned Gold and grasping in the dexter claw a Sword in bend sinister proper pomel and hilt Gold five Lozenges Sable; the Shield ensigned with a Mural Crown Gold.

Before 1961 the Council had used the arms of the Diocese of Durham because the Council could be said to have succeeded, in some measure, to the palatinate jurisdiction formerly enjoyed by the palatine Bishops of Durham. In order to stress this succession the lions were depicted in the arms as grasping swords and wearing on their heads coronets used by the bishops in conjunction with the mitre. As a further mark of difference the cross was charged with five black diamonds, which are generally used to represent coal and the industries dependent upon it.