From Heraldry of the World
Your site history : Durham (Ontario)
Jump to navigation Jump to search 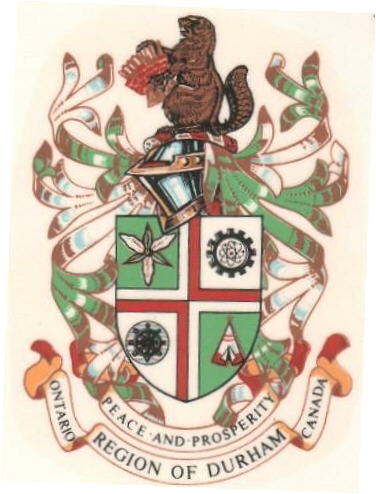 Arms: Quarterly Vert and Argent a cross quarterly Argent and Gules between a trillium proper a cogwheel Sable within the same a conventional representation of a neutron consisting of an atomic particle Gules enclosed by four electronic orbitals Sable each set with a like particle a roundel barry wavy of ten Argent and Vert charged with a ship’s wheel Sable and a tepee Argent garnished Gules
Crest: A beaver sejant erect proper supporting between his legs eight stalks of wheat Or enfiling a mural crown Gules masoned Or
Motto: PEACE AND PROSPERITY

The arms were officially granted on December 3, 1975 (UK granted) and registered on July 22, 2000 (Canadian Register)

The symbols are a Trillium (emblem of Ontario), Cogwheel with Neutron, a Ship's Wheel and a native American Teepee. The Beaver in the Crest holds 8 stalks of wheat for each of the constituent municipalities.